Not that we were surprised or anything– yeah, we had mice. Our first day of moving in, Anni was eagerly inspecting the lovely antique hand carved tallboy bureau in the master bedroom. When she opened a top drawer, lo and behold! – a nest. With tiny baby mice in it, no less.

Oh swell. Now we were right up against our stated intention to live out here in the Forest with the critters, close to the land; use no poisons, kill no critters, plant no non-indigenous Florida plants, recycle everything– the whole Back to the Earth thing. But. We couldn’t leave that smelly nest where it was or Ann’s underwear would be chewed to bits!

It was warm enough that November that we didn’t worry too much about the little ones being outdoors, their momma would probably find them, right? So out they went, someplace Anni found that was “relatively” safe from predators. We hoped.

Fast-forward a few weeks to a cold winter’s night, quite late, when we were rudely awakened by a loud thumping and banging. I grabbed a flashlight and headed toward Anni’s side of the cabin, which seemed to be the center of the action.

Anni had the bathroom light on and was apparently talking to Cami the Siamese cat. As I turned the corner of the bathroom hallway I heard “Now you just–ugh!- no, come with me…agh!” then a loud squeal-scream sound that I had never heard Cami make. Freaked out, I bolted the last couple of steps into the bathroom and before me was a scene from a comic book, or a children’s tale, or maybe just a bad dream.

Anni was bent over the foot of the tub, her back to me, struggling with a slippery Cami, who was wriggling like an insane thing, clawing at Anni and spinning in mid-air as Anni groped for a better hand-hold. The squeal-screaming went on and as I processed that the sound was coming from someone or something besides Cami, Anni yelled “Damnit! Quite scratching me, Cami!”

One step closer to the action and I could now see that at the other end of the tub, under the faucet, was a grey field mouse standing on its hind legs, squealing at the top of its little lungs while it frantically clawed the air in front of it.

“Oh my god!” I stood rooted to the spot until Anni barked “I could use a hand here!  — Damnit, Cami!”

Somehow we managed to fling Cami out of the bathroom and close the door. Panting, Anni stood at the end of the tub glaring at the mouse as it was doing its best to try to jump up the slick sides of the tub to escape, but the sides were way too tall.

Before I could ask, Anni explained that she had heard the racket in the bathroom, came in, turned on the light, and there were Cami and the mouse down in the tub, duking it out! The cat was trying to snag the mouse, but the mouse was making a credible effort to defend itself, with squeals, screams and snarls, running in circles and finally standing on its hind feet to claw out at the cat!

If I hadn’t witnessed the mouse’s defensive stance, I wouldn’t have believed it.

We started chuckling and watched the little rodent as it pitched itself again and again at the slick tub walls, to no avail.

We decided that was one brave little critter that surely deserved to live to fight another day, so Anni put something over it (a hat, I think), caught it up, and headed outside to let it go. She was trailed all the way by Cami, who stared at Anni’s hand and meowed most pitifully.

The winter pressed on and we soon grew tired of waking to the sound of pots and pans rattling at night in the kitchen, with little mouse turds left behind to inform on the culprits. Trying to forestall the raiding of the pantry,  we abandoned Zip-Lok bags for sturdy plastic containers to store any and all dry foods. We kept what we could in the fridge, which was not only a deterrent to mice but also larder beetles and the tiny sugar ants that would go on safari throughout the open kitchen area. Keeping up with the critter incursions was almost a full time job– one that wore thin as the seasons spun around.

By the time winter #2 was in full swing, I opened up a bedside drawer to don a favorite sweater, only to discover a mouse had made a nest using a vast amount of my sweater material, and then had the gall to piss all over the nest as well! What a stinky mess to clean up. That was it. War was declared. Forget the Back to the Earth movement, it was Them or Us.

Checking shoes and boots for spiders and scorpions was one thing. Keeping a wary eye out for the venomous snakes was OK, it was their yard and lake after all. Scraping the mold off anything leather before you donned it was understandable, as was storing anything and everything you wanted to preserve in some sort of hard plastic. I got all that. But I was NOT going to give up my kitchen to the damn mice. And their pee. And their pellets.

So, out came the Have-A-Hart live traps. Which didn’t work worth a damn. Next thing, we graduated to the glue traps. Well, OK those worked fine. Except the first night we caught a mouse, we came into the kitchen and turned on the light (middle of the night, of course) to see what was causing all that thumping. It was a field mouse, with all four feet knee-deep in the glue trap, flipping itself and the trap across the counter as it tried to gain freedom. The string we’d threaded through a hole in the edge of the trap and tied off to I-forgot kept the thing from dancing off onto the floor and under the stove or a wall, thank goodness.

We looked at each other. Well, someone had to put the mouse away in a somewhat humane manner, there was simply no pulling its little feet out of that glue. So, we disposed of it by suffocating it in a plastic bag and– no, I really can’t go on. It seemed so barbaric and awful.

Once again I cried. Jeez. This living close to the land really sucked. But damnit, this was also a question of health and safety. The kitchen was off limits. I could tolerate critters anywhere but there. We’d just keep tightening our defense tactics and keep a couple of glue traps out, just in case.

And yeah we did catch a couple more mice but then the weather warmed and the issue went away. For the moment. 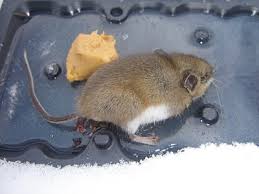